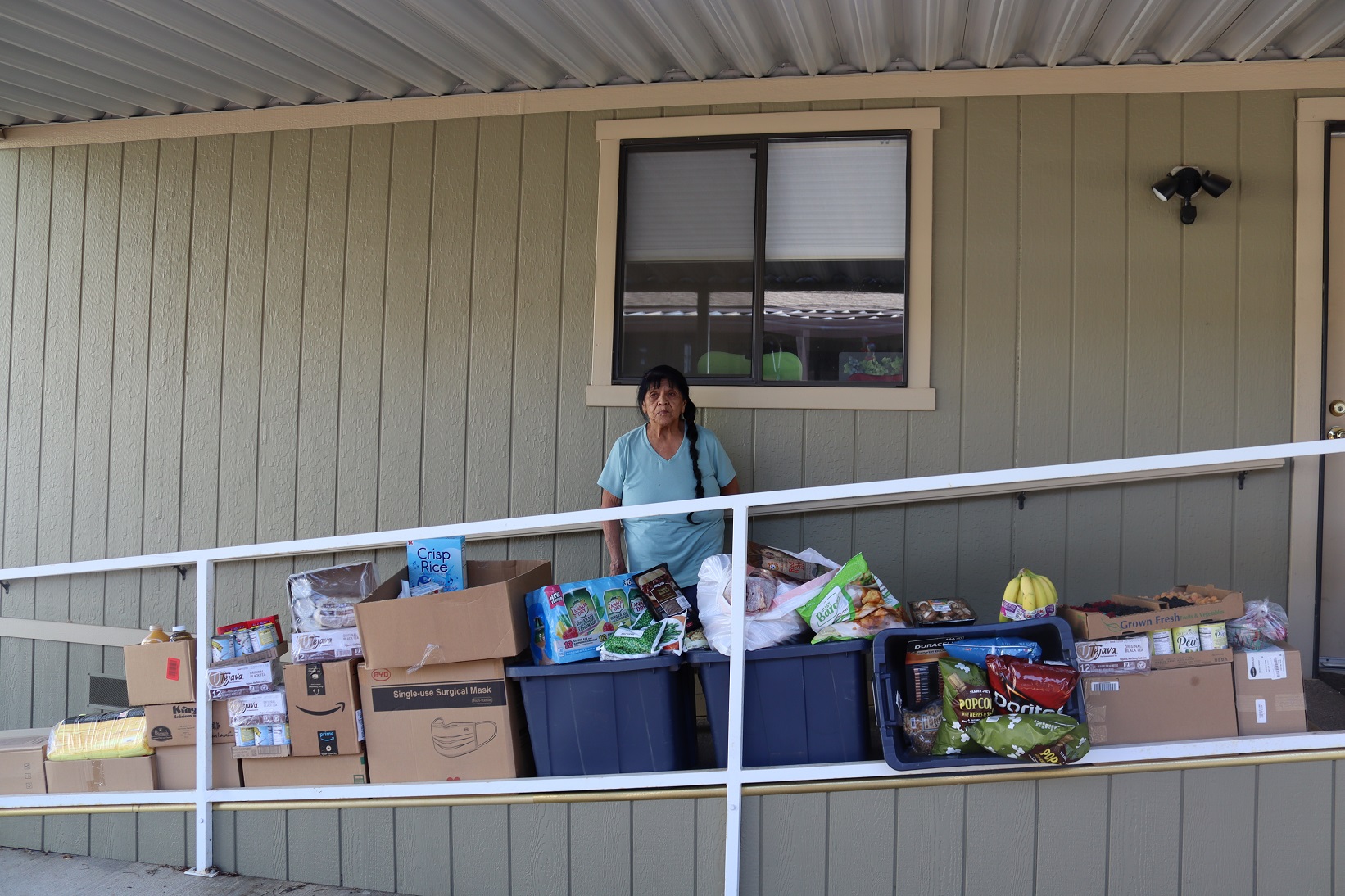 On Thursday, June 23rd, 2022, The California Valley Miwok Tribe made this month’s distribution of the Food For Tribal Families, (FFTF) Program to its director Mildred Burley.
This distribution was very extensive and much was donated and purchased to help meet the nutritional needs of all tribal citizens.
This month’s delivery included but was not limited to Snacks, Soda’s, Tea’s, Coffee, Frozen Meats, Lunch Meats, Fresh Fruit, Berries, Frozen Vegetables, Canned Goods, Juices, Cereals, Breads and all kinds of mixes and various other items. Also included was a resupply of Covid related materials.

This program was created to address citizens’ needs based upon the Bureau of Indian Affairs dereliction of trust responsibilities and refusal to give access to sorely needed programs and assistance inherent by right to all federally recognized tribes and their duly enrolled citizens.
We were patiently waiting for a ruling over our issue from AS/IA Bryan Newland and expected that by the end of the year, between meetings with all interested parties and requests for representations and filings, which is the normal course of how business is conducted, we would maybe get a decisive answer.
Contrary to protocol, what we received was an addition of yet another uninterested party previously excluded being reinstated by Mr. Newland. Further muddling up the issue without so much as including anyone this decision affects, withholding the opportunity to meet, represent positions or submit filings.

Mr. Newland is just the most recent BIA official who is trying to run roughshod over our tribal rights and sovereignty telling the tribe who they, “the BIA” will make citizens of our tribe against our will by trying to impose a secretarial election that no enrolled member voted for or even wants.
Not only that but all non-tribal, never enrolled, no federal recognition, factions supported by casino backers have already made it known that if they are given the tribe through this theft currently being concocted by the BIA that all real and current federally recognized citizens will be immediately disenrolled, this also includes the tribe’s full blood elder Mildred Burley.

To this writer I do not see the distinction between Bryan Newland being Vladimir Putin and the BIA being Russia, trying to come in and destroy this tribe much like what their spiritual counterparts are currently attempting in the Ukraine.

Do your worst, Mr. Newland, and we will continue to do our best to fight against your injustices against the rule of sovereignty, tribal rights to self-govern and our citizens whose rights we are sworn to defend.

We would like to thank at this time the communities, businesses, tribal citizens and volunteers who have for years now come together to address this tribally needed program when the Bureau of Indian Affairs through incompetence, bias and corruption has illegally disenfranchised this tribe from all resources in an attempt to force the submission of our inherent rights and bend us to their will.

In this video during a food for tribal families delivery that was created to address needs of tribal citizens disenfranchised by the BIA, California Valley Miwok Tribal Elder Mildred Burley speaks out against a recent decision by AS/IA Bryan Newland that will be proven to have no foundation in law and is arbitrary and capricious.

With the litigation cycle already in motion, this issue is expected to escalate over the coming months.

Mr. Newland either pressured by highly ranked elected officials who the tribe has already exposed, or by biased officials whom have as of yet an unknown control over him, or even further yet the unwillingness to re-institute something that a previous administration which he was a participant in had rightfully decided under well established Indian Law, we do not know. Maybe he is just following the border policy of his administration, and if U.S. borders can be breached, then why not the sovereign borders of federally recognized Native American Tribes. Sad thing here is he is entrusted with working with native tribes, tribal governments and ensuring and promoting a better future for the citizens of all of the federal native tribes he has been entrusted to serve, so why has he excluded us?

His latest action is a total violation of the trust responsibility that he accepted by assuming his appointed post. Instead of addressing what was before him, he enlarged the argument to expand the issue against the current tribal citizenship and their government and created a California Gold Rush free for all. It has once again been put upon the tribe to pursue legal remedies that it appears Mr. Newland may have thought too laborious for his baby soft hands to handle.

Once again, our mistrust of the BIA has been affirmed. That is okay, the tribe has always had to fight the hard fight, standing alone in the trenches, and we shall not go quietly into the night.

Thank you all,
THE CALIFORNIA VALLEY MIWOK TRIBE