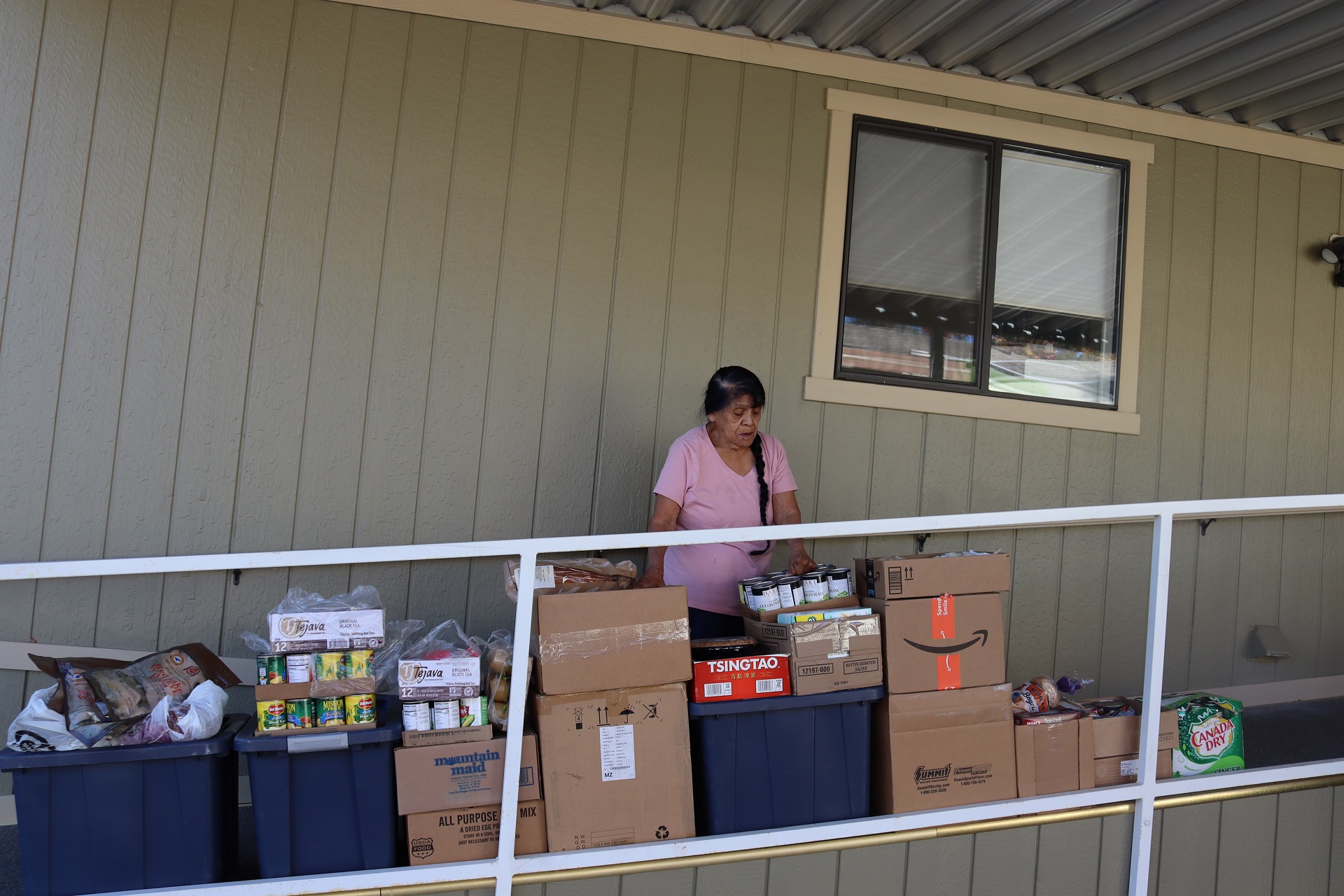 On Sunday, November 20th, 2022, the California Valley Miwok Tribe fulfilled the November delivery of the Food For Tribal Families Program to
it’s Program Director, Mildred Burley. The distribution also included pies, breads and soda’s because of the holiday distribution.
With roasts, fresh and canned vegetables, fruits, cranberry sauces, bagged potato’s, pie mixes, and various other items all should have complete holiday meals.

It is almost time for yet another attempt by the BIA to do their worst, so as our tribal citizens try to enjoy their holidays with their families they remain ever hopeful
that current actions being done on their behalf by their tribal government will once again be successful. Ensuring those hopeful both young and old alike that the future of of our tribal children may for once and all be secured and that they may live without the constant fear that the United States government will succeed in throwing them and their families into the street.

Undermining tribal sovereignty and starting that procedure at the end of Native American heritage month displays the nefariousness and hypocrisy of those placed to run the BIA by the current administration. Identity politics’ does not work when an administration does not like the identity of actually who you are
and seeks to destroy you and issue false I.D.’s and create fact from fiction. Such is the mindset of the local Sacramento BIA and their Washington D.C. accomplices.

As spoken in the accompanying video, California Valley Miwok Tribal elder, Mildred Burley, speaks of the previous and ever continuing tortured history her tribe has had to endure at the hands of a very disgruntled Bureau of Indian Affairs.

At a time some 25 years ago, the tribe asked the BIA for technical assistance when the service was offered by tribal operations of the Central California Agency in Sacramento California. A, “boilerplate” governmental document was offered for the tribe to consider, reject or modify to fit their current needs as it was not written specifically for the tribe but was a generic document. At that time, the BIA specifically conferred to the tribe that as a federally recognized tribe with full inherent sovereign authority, it was up to the tribe to decide what kind of documents of oversight they may wish to create whether implementing that document or not. The tribe took the assistance working with the BIA and modified the document to better reflect the needs of the tribe’s current size, government and citizenship, projected future growth and economic and development needs for the time and in the future to be able to adequately provide for and service the tribal body. In essence, a wholly new document was created but retained much of the spirit of the generality that it was born of. The document became known as G.C. 98-01 and the tribe had a resolution form of government. The BIA and the tribe had what now can be reflected upon as a harmonious government to government relationship.

Alas but within a few years, the BIA allowed and knowingly assisted a local swindling casino seeking street vendor who when trying to make a big score in life after many failed attempts, set his eye’s on Indian gaming and more specifically this tribe to satisfy his lust for money. This story is a broken record, that at any time in American history where there is always a tribe being victimized due to the greedy intent of an outsider. In this endeavor, the BIA started working with this casino seeker, interfering into and allowing outside interference into the tribes government to government relationship affecting the tribe’s programs and the BIA’s contracted obligation’s to the tribe. The issues worsened when Casino Mogul A.D. Seeno Jr. of the Peppermill casino franchise was brought in to secure the tribe. Mr. Seeno with contracts explicit in milestones to be met, including the overthrow of the tribal government was unsuccessful and so was replaced by Senator Dianne Feinstein and billionaire husband Richard Blum.

With the power of billions and the illegal and undue influence of one of the most powerful Senators in the nation in a quest to build the biggest money producing entertainment enterprise in the bay area, a location she defended against previous tribes taking up vacancy saving that prized real-estate for herself and her scheme’s, Feinstein waged what can only be described as a holy war against the tribe to destroy it, populate it with contractually obligated non-native, non-tribal individuals and instruct greedy and complacent BIA bought and paid for operatives to enroll them to initiate her development scheme. Although still ongoing with her husband dead and a major known decline in her own cognitive abilities, this threat has weakened and has noticeably diminished. Also during all this and to this day, the BIA has illegally and in defiance of federal law in regards to, “Grassrope” disenfranchised the tribe and denied it all assistance and services thinking to starve the tribe into submission. This action was implemented over a decade ago and thinking the tribe would capitulate, the BIA has also failed miserably at this.

Now once again of their own volition they are just trying by governmental force to steal the tribe. This is the third time this approach has been tried after being unsuccessful in doing so both legally and politically. The U.S. government and more specifically the BIA has tried this newest approach in 2019 and again in 2021. The BIA now attempts to disenroll all federally recognized citizen’s of the tribe for whom they have already for over a decade denied all services, then enrolling only those bought and paid for by non-Indian developers whom also have undue influence or financial control over BIA policy makers. The new twist in this is that the BIA has such a hatred of the tribe for defending it’s sovereignty and citizen’s against their illegal intrusion’s that the newest culprit AS/IA Bryan Newland has now even included and is trying to add a third party of uninterested individuals to the mix, anything to just destroy this tribe and it’s Indian people’s. All those involved from non-tribal personal enrichment seeking individual’s to participating governmental employee’s and the developers whom have them on a short chain and leash are the lowest of humanity and a disgusting disgrace to Indian people’s to which we swear we will never succumb.

At this time on a more positive note, we would like to thank all those listed below, that are from all around who have stepped up and assist tribal people’s such as ours’s when government agencies entrusted with those very trust responsibilities either through lack of competence or compliance continue to fail our people’s miserably.
The United States Department of Agriculture, The Federal Emergency Management Agency, California Office of Emergency Services, Food For Less Stores Inc., Walmart Stores Inc., Costless Stores Inc.’ The Grocery Outlet Inc., the great people of the community of Morada, individual donator’s, participant’s and volunteer’s, Program Director, Mildred Burley, for her tireless efforts in addressing the needs of her fellow tribal citizen’s and their families.

THANK YOU ALL,
THE CALIFORNIA VALLEY MIWOK TRIBE