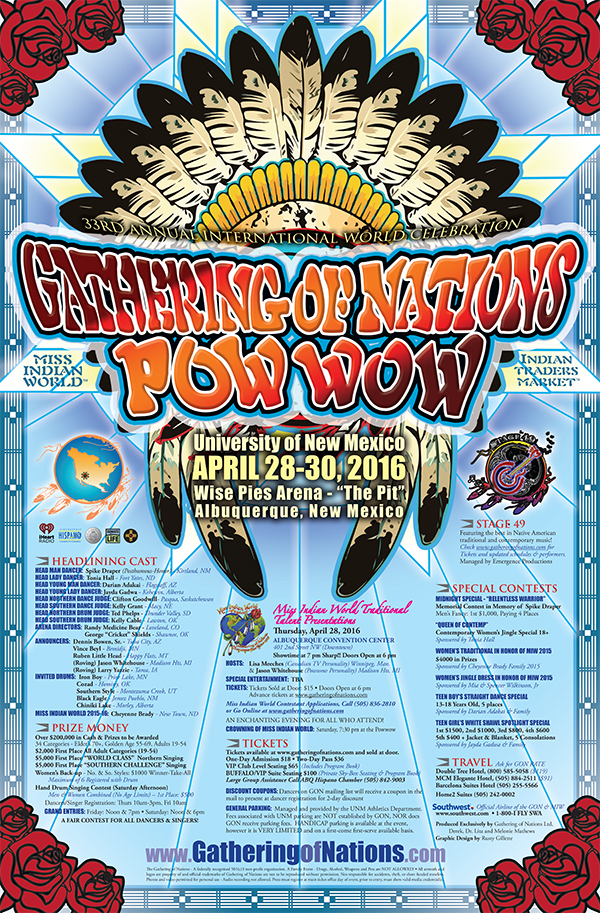 The Gathering of Nations PowWow itself is a 2 day event (April 29th and 30th, 2016) held at UNM WisePies Arena aka “The Pit” in Albuquerque, NM, USA. The GON experience is for all people (Indian and Non-Indian) to come see colorful Native American PowWow dancing, to hear the songs and become enlightened with emotional happiness!

With over 3,000 indigenous/Native American/Indian dancers and Singers representing more than 500+ tribes from Canada and the United States come to the Gathering of Nations PowWow annually to participate socially and competitively. Included with the price of a Gathering of Nations Pow Wow Admission is the Indian Traders Market and Stage 49. The Indian Traders Market offers a very special shopping experience, which includes intercultural traditions and exhibition of Native American Arts and Crafts with over 800+ Artists, Crafters, and Traders that will display their wares and for sale.

There is a “Magic” about the Gathering! A Family and Friendly Event, Everyone (the public) is Invited!”

For more information, including ticket prices and schedule of events, please visit the Gathering of Nations official website at https://www.gatheringofnations.com/