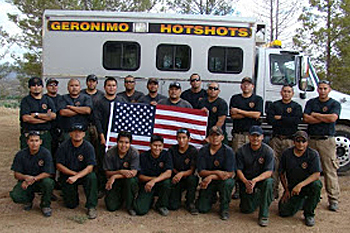 The California Valley Miwok Tribe would like to convey our sincere appreciation to all the fire fighters, hotshot teams, U.S. Forestry Dept., law enforcement, volunteers and local and far reaching community members, and friends who pulled together to assist in the now famously known Yosemite Rim Fire, Stanislaus National Forest. The wildfire began on August 17, 2013. The estimated containment date is Friday, September 20, 2013. The fire has consumed 256,895 acres and is now considered 84% contained. There are still approximately 1,406 personnel onsite.

One of the firefighting teams that assisted with the containment of the Rim Fire is the Geronimo Hotshots from the San Carlos Apache Tribe out of San Carlos Arizona.

CVMT Chairperson Silvia Burley recently wrote a letter to the San Carlos Apache Tribe, San Carlos Fire Department and the Geronimo Hotshots Team, saying “As the Chairperson of the California Valley Miwok Tribe, I am writing to sincerely thank you for assisting with the Rim Fire in Tuolumne County, California. We have many friends who live at the Tuolumne Rancheria located outside of Tuolumne City, east of Sonora. We were very worried for their safety. Also it was heart wrenching to see so much forest burn in and near the Yosemite National Park. Our Tribe felt we had to express our heartfelt thanks for the bravery and strength you showed in fighting such a horrific and devastating fire. We are proud of and grateful to the San Carlos Geronimo Hotshots Team, the San Carlos Fire Department, the San Carlos Apache Tribe, and to the families of the brave, heroic, and selfless firefighters who put their lives on the line every time they are called to help others in need. You all will be forever in our hearts and our prayers.”