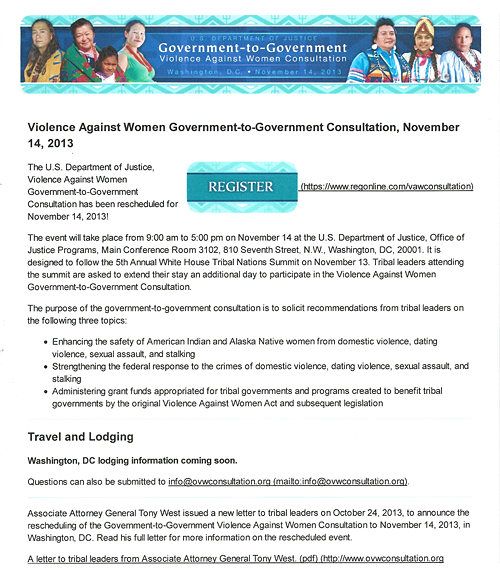 Save the Date: A flyer for the United States Department of Justice, "Violence Against Women" Government-to-Government Consultation, to be held on November 14th, 2013 in Washington, D.C.

The California Valley Miwok Tribe received an email from Kauffman & Associates, Inc. informing the Tribe about the upcoming U.S. Department of Justice, Violence Against Women Government-to-Government Consultation that has been scheduled for November 14, 2013.

The event will take place from 9:00 am to 5:00 pm on November 14th, at the U.S. Department of Justice, Office of the Justice Programs, Main Conference Room 3102, 810 Seventh Street, N.W., Washington, DC 20001. It is designed to follow the 5th Annual White House Tribal Nations Summit on November 13. Tribal Leaders attending the summit are asked to extend their stay an additional day to participate in the Violence Against Women Government-to-Government Consultation.