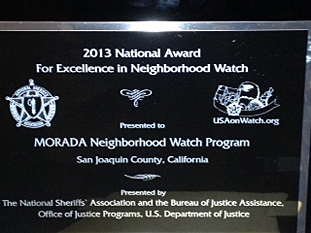 The California Valley Miwok Tribe congratulates the Morada Neighborhood Watch Program for their excellent work in deterring crime in the community of Morada.

Each year only three (3) of these awards are given out in the entire nation. Morada’s NW got one of those three awards. On Tuesday, August 27, 2013 the San Joaquin County Sheriff Steve Moore presented Donna Augustine with a plaque award that says. “2013 National Award for Excellence in Neighborhood Watch, presented to Morada Neighborhood Watch Program, San Joaquin County, California – Presented by The National Sheriff’s Association and the Bureau of Justice Assistance, Office of Justice Programs, U.S. Department of Justice”.

The California Valley Miwok Tribe would like to take this time to thank the Morada community, the Morada Neighborhood Watch Program, Bill Hughes, Donna Augustine; Gayle Harrell; Sheriff Steve Moore; Deputy Riley; the National Sheriff’s Association; the Bureau of Justice Assistance; Office of Justice Programs; the U.S. Department of Justice and the individuals who provided food and drinks at the presentation. CVMT would also like to express our appreciation to the Spring Fellowship Church at 4799 Foppiano Lane, where the presentation was held.