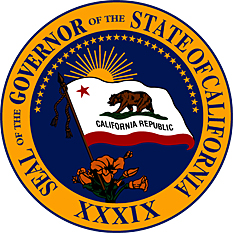 Seal of the Governor, State of California

Today, the California Nations Indian Gaming Association (CNIGA) is hosting a Roundtable Discussion at the Thunder Valley Casino Resort (1200 Athens Ave, Lincoln, CA) in which Mr. Jacob Appelsmith will introduce to Tribal Leaders, the newly appointed Joginder Dhillon as the Senior Advisor for tribal negotiations in the Office of the Governor.

Below is the press release (dated August 15, 2013) as posted on the official website of the Office of the Governor:

Joginder Dhillon, 52, of Sacramento, has served in multiple positions at the California Gambling Control Commission since 2009, including chief counsel and acting executive director. He was general counsel at the California Emergency Management Agency from 2007 to 2009, director of academic support at the University of the Pacific, McGeorge School of Law from 2005 to 2007 and an associate at Booz Allen Hamilton from 2004 to 2005. Dhillon was an associate and shareholder at Schuering Zimmerman Scully and Doyle LLP from 2002 to 2004. He served as legal advisor at the U.S. Space Command and at the North American Aerospace Defense Command from 2001 to 2002 and was chief of operational law from 1999 to 2001.

Dhillon served in multiple positions at the Air Force Legal Services Agency from 1994 to 1998, including deputy chief of the Military Personnel Branch’s Litigation Division and Labor Counsel at the Central Labor Law Office. He was an assistant professor of law at the U.S. Air Force Academy from 1991 to 1994 and assistant staff judge advocate and area defense counsel at Howard Air Force Base from 1988 to 1991. Dhillon earned a Juris Doctorate degree from Harvard Law School and a Master of Law degree in intellectual property law from the University of Houston Law Center. This position does not require Senate confirmation and the compensation is $152,076. Dhillon is registered decline-to-state.