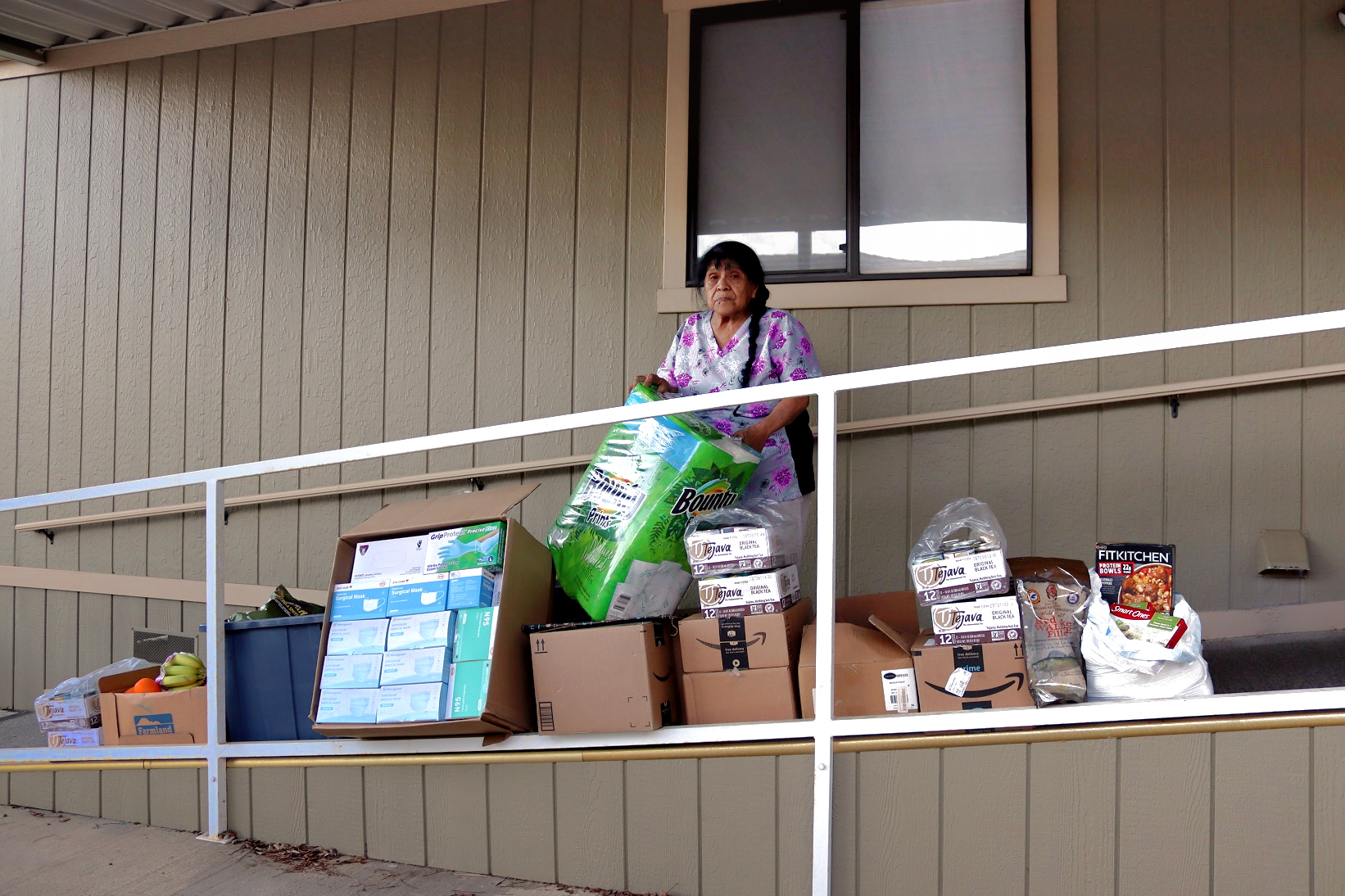 On Friday, March the 25th, 2022 the California Valley Miwok Tribe delivered this month’s tribal food supplies to Program Director Mildred Burley. This month’s distribution once again included extras, including paper supplies, fresh picked fruits from tribal properties, snack foods and various frozen meals from the supermarket.
This month also included various meats including hams, bison, pork, roasts and steaks.
Also included were various Covid program supplies that the tribe contracts with state and federal authorities to receive.
In this story, a video with description is included, in which our tribal elder makes a statement on behalf of all of her peoples.
She keeps our culture and heritage alive and thriving, passing down all of her knowledge and experiences as the last known living of indigenous peoples born on tribal land that has long since been taken away by the federal government.
Also included at bottom of page are links to the deposition of the straw man who the BIA in conjunction with Senator Dianne Feinstein are trying to steal the tribe for who has already signed away all rights, ” he is not even entitled to ” for casino riches. It is an amazing read into incompetence.
Also the Everone / Ludwig audio archive in which the swindler and creator of this decades long attempted swindle exposes himself being candid in recordings and revealing the truth to a would be potential investor.
The tribe would like to thank the United States Department of Agriculture, Cal OES, FEMA, Walmart Stores Inc., Food For Less Stores Inc., The Grocery Outlet, Cost Less Stores Inc., Morada and its surrounding communities who continue to give even after the tribal relocation, and our outspoken tribal elder and Program Director, Mildred Burley who refuses to bend against the will of all those elected, bureaucratic and investing that continue to oppress her tribe, her fellow tribal citizens and herself.
On Friday March 25th, 2022, the California Valley Miwok Tribe delivered to “Mildred Burley” the tribe’s elder and Program director in Charge of the distributions for the, “Food For Tribal Families” Program this month’s donations.
Mildred, 84 years young, seen in this video with a basket had just finished a collection of her own handmade Miwok jewelry.
Mildred wanted to make a statement over the frustration she feels on behalf of herself and her tribal people over the abysmal way the local BIA / Central California Agency has treated her and her tribe every time a new scheme or new group get presented to them with a casino developer and agenda to take over the tribe and remove all of its tribal citizens.
The dereliction of the local agency’s responsibilities to this federal tribe and its withholding of contract support for over a decade have caused great hardship to young and old alike. This is compounded even further by their ever continuing violation of the tribes sovereignty and attempted theft of the tribe every time a casino proposal is introduced to them warranting the theft of our tribe to complete the transaction.
Local BIA Superintendent Troy Burdick who assailed this tribe for over a decade was even recently terminated over his direct involvement in this and for violating the tribes rights under the Indian Child Welfare Act. In that issue, he tried to disenfranchise the tribe and conspire to give all rights to the placement or representation of Indian children in court proceedings to a Caucasian individual with no tribal affiliation or rights.

Even though the BIA fired Mr. Burdick, they allow this to go on.
To the tribe, it appears he did not get fired for his malfeasance but because he was wholly incompetent and failed, and so had to be removed and be replaced by another more devious and intelligent than himself. Senator Dianne Feinstein has even been exposed as a major player in this continuing criminal violation of this tribe’s sovereign and tribal citizens civil rights.
This is why not only Mildred but the entire tribe is frustrated and appalled. We wonder why all true Native Americans and tribal people are also not appalled?
If it is because of some narrative that the BIA has put out that we are not aware of and if you are reading this you need to ask yourselves, when has the BIA ever told an Indian the truth?

Click on the pdf below to see the type of individual entrusted with signing away the tribe’s culture, history and sovereignty if this steal is to be allowed. All in pursuit of a casino for a tribe that he is not even an enrolled member of. This deposition brings out the very question of this individual’s competence.
Also, how does an indigent hire Morgan, Lewis & Bockius, the 9th largest law firm in the world? Or better yet, which of the involved billionaires in this theft is actually paying this bill to steal a tribe for Bay Area gaming?

Also to hear the architect of deceit in his own words speaking of this scheme to a potential investor, click on the accompanying link also provided below.
Then click on the Everone / Ludwig Audio Archive on left hand side of page, all will be revealed.