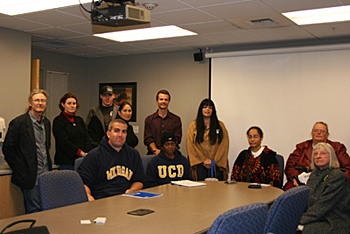 Chairperson Silvia Burley, standing fourth from the right, with Cosumnes River College faculty, staff and students whom stayed for discussion after the speaking engagement.

Chairperson Silvia Burley of the California Valley Miwok Tribe was invited to speak on the issues of tribal sovereignty and cultural preservation in the southeast office complex conference room at the Cosumnes River College on October 14th, 2009.

Arriving early, Silvia attended a showing of the struggles of a local college called DQ University. Being a former “American Indian Higher Education Consortium Student of the Year” (1996-97) and graduate of DQU (1997), she spoke to the class of all of the things that DQU had done for her and how important the institution is to Indian students whom can no longer acquire a higher education with reverence to their cultural sensitivities through DQU, now that the university has lost its accreditation and has been forced to shut down. The sorrow she expressed was felt by the students, many of whom approached her after the screening.

Later in the southeast conference room, Chairperson Burley addressed the issues that she had been invited to speak on. She began with stories that reflected on the culture which surrounded her while growing up and how that culture is being erroded by time and outside influences. She appealed to the students that as fellow Californians, the history and culture of her people is also part of them and as such, needs to be protected. She also spoke of tribal sovereignty, how tribal governments conduct daily business and their government to government relationship with the United States and how the only way for Indian culture and tribal sovereignty to remain strong is through the vigilance of those it affects, as well as the support of the people whom were in attendance and made this event memorable.