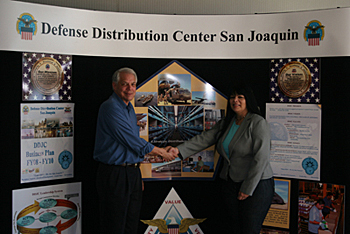 During the site visit, Mr. Richard D. Maldonado, of the Office of the Commander and California Valley Miwok Tribal Chairperson Silvia Burley took a photo to commemorate this first meeting.

On Friday, October 30th, 2009, Tribal Chairperson Silvia Burley and Tribal Consultant Tiger Paulk were invited by Richard D. Maldonado, of the Office of the Commander, to tour the Tracy facility of the Defense Distribution Center, San Joaquin (DDJC), located at 25600 S. Chrisman Rd, Tracy, California. The DDJC is one of only 25 distribution centers located in the continental United States and is the second largest. It has to meet the logistical needs of all US armed services; such as the Army, Navy, Marines, and Airforce – as well as military allies worldwide. Aside from warehousing and distribution, some assembly of various items is also performed on-site.

The reason for the invitation was to begin what will become a partnership between the Tribe and the Defense Distribution Center to educate and make aware to the indigenous communities, the opportunities that are available for qualified Native Americans seeking fulfilling employment with advancement opportunities and good benefits. The DDJC has reached out to the Tribe in this endeavor and the Tribe, believing this to be a first locally, is very proud to have been selected to work with the DDJC on this outreach program. The Tribe will be working with DDJC to put forth the best efforts for getting information out to the Native American community and looks forward to giving support to any other projects in the future in which DDJC wishes to involve the Tribe.

The Tribe and its members would like to thank the Defense Distribution Center, San Joaquin for initiating an outreach program such as this and inviting the California Valley Miwok Tribe to partner with them on this endeavor, as well as the employees that the Tribal representatives came in contact with, whom were so courteous. We would especially like to thank Richard D. Maldonado, for being so informative and representing the site and the Office of the Commander in such a professional manner.