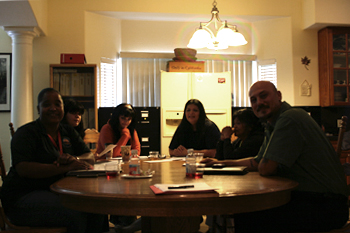 The California Valley Miwok Tribe (located at 10601 N. Escondido PL, Stockton, CA, as listed in the Bureau of Indian Affairs’ BIA/DOI Spring 2011 Tribal Leaders Directory), a federally recognized tribe eligible to receive and distribute services from the federal government – on Thursday, June 16th, 2011, held a meeting at the tribal offices with officials from the Shingle Springs Rancheria Cultural Preservation Department. In attendance representing Shingle Springs Rancheria were Daniel Fonseca, Cultural Resource Director and Crystal Dilworth, Office Manager/Project Coordinator. The purpose of the meeting was to consult over remains and artifacts that are currently being held by the Phoebe A. Hearst Museum of Anthropology at the University of California, Berkeley, that the Shingle Springs Cultural Department has tirelessly sought to acquire for repatriation to the consecrated ground from which they were removed.

It seems that there have been conditions that have been placed upon the Shingle Springs Rancheria in this matter that are above and beyond the federal regulations of the Native American Graves Protection and Repatriation Act (NAGPRA). The window of opportunity to be able to lay these once proud indigenous peoples back to rest from ground that they were wrongfully taken from, so that their spirits may finally rest in peace and solitude, is currently slipping away.

At the bequest of the Phoebe A. Hearst Museum, the Shingle Springs Rancheria Cultural Preservation Department contacted all currently federally recognized tribes within the jurisdiction of the Central California Agency Bureau of Indian Affairs for consensus on their request. The support was overwhelming, with all tribes concurring in support of allowing Shingle Springs to bring our brothers and sisters home. The consultation the Tribe had with Shingle Springs Rancheria officials, Mr. Daniel Fonseca and Ms. Crystal Dilworth, was very informative and their personal conviction and professional demeanor was well displayed during their presentation. The Tribe on this day was in total agreement on what was presented to them and by the end of day in which the meeting was held, had sent the Shingle Springs Rancheria officials back to their tribe with a letter in full support of their continuing efforts for repatriation and had sent a likewise letter to Mr. Anthony Garcia, Ph.D., Repatriation Coordinator, UC Berkeley.

(At the time of this writing, the California Valley Miwok Tribe has a scheduled consultation with UC Berkeley officials at the Phoebe A. Hearst Musuem, to discuss among other things, the subject matter within this story. The results of this consultation and additional information will be posted forthcoming.)

The respect and the support in the endeavors of California’s Native American tribes in working together to repatriate and protect the final resting places of those whom from which we came cannot ever be understated. It is the most basic of moral and ethical obligations that mankind is capable of fulfilling, to be able to do for those who have come before and whom no longer have a voice, without whose very existence we would not be here today. This is truly an honorable action on behalf of the Shingle Springs Cultural Preservation Department and the California Valley Miwok Tribe is proud to support them in this endeavor.