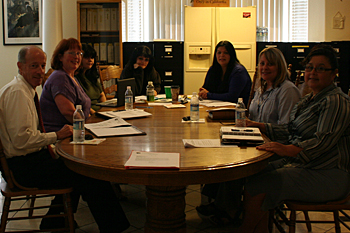 The California Valley Miwok Tribe (located at 10601 N. Escondido PL, Stockton, CA, as listed in the Bureau of Indian Affairs’ BIA/DOI Spring 2011 Tribal Leaders Directory), a federally recognized tribe eligible to receive and distribute services from the federal government – on Tuesday, June 14th, 2011, held an initial “meet and greet” with Ms. Carrie Bowen, Director of the California Department of Transportation (Cal-Trans) District 10. With its offices located in Stockton, California, this is the district in which the Tribe has the most consultation and partnerships on projects that are being undertaken within its aboriginal territory.

Since her appointment as District 10 Director in January of this year, this was the first opportunity to hold such a meeting and the Tribe looks forward to strengthening its relationship with Ms. Bowen as much as it did with her predecessors. Ms. Bowen was accompanied by Cal-Trans staff comprising of Kathleen McClaflin (Indian Liaison), Maria Rodriguez (Associate Transportation Planner) and Ken Baxter (Deputy District Director/Planning and Local Assistance). Topics discussed included recent events in the Tribe’s history, of misleading contact information and of the on-going deficiencies in the information provided by the California State Native American Heritage Commission; as well as the current status of the Tribe, its currently recognized membership and the Tribe’s recognized officials, whom conduct tribal business with all branches of the state and federal government.

Cal-Trans and the Tribe then discussed the advancement of different technologies that are helping them to evaluate sites, while minimizing ground disturbance and alleviating adverse cultural impacts. Tribal representatives also spoke with Cal-Trans of the many federally recognized tribes that are starting to unify on various issues that will ease some of the confusion that burdens the state during consultations when they cannot find a common census. During the meeting, Cal-Trans and the Tribe agreed that the strengthening of the current relationship between them would be to the mutual benefit of both parties, with better contact information and more involvement. The Tribe was very appreciative that Ms. Bowen was able to attend this meeting, accompanied by staff and many more subjects were discussed on this day in a very cordial and friendly manner, with both parties learning much from one another.

The Tribe was even afforded the time to give a tour of the wall of achievement, that through picture, illustration and official correspondence, displays the Tribe’s history as a functioning government from its first resolution (GC-98-01) organizing it as a resolution form of government, to its United States Department of Agriculture Tribal Food Distribution Program, hosted with the assistance of the Tule River Tribe, that was held on the previous day.

Ms. Carrie Bowen has 20+ years experience with Cal-Trans and as its new District 10 Director, the Tribe looks forward to a better understanding and a great working relationship between Cal-Trans and the Tribe and we thank her and her staff for allowing the Tribe the time for this meeting in their busy schedules.