CVMT Consultation with the University of California, Berkeley 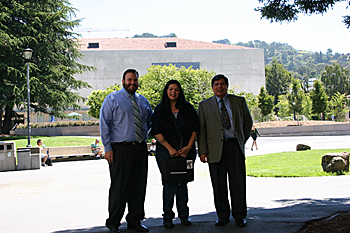 The California Valley Miwok Tribe (located at 10601 N. Escondido PL, Stockton, CA, as listed in the Bureau of Indian Affairs’ BIA/DOI Spring 2011 Tribal Leaders Directory), a federally recognized tribe eligible to receive and distribute services from the federal government – on June 22nd, 2011, attended a consultation between the Tribe and officials of the Phoebe A. Hearst Museum of Anthropology. The consultation was conducted at the museum offices in Kroeber Hall, which also houses the museum and is located on the campus of the University of California, Berkeley. The consultation originally was in regards to the Tribe’s full support for the Shingle Springs Rancheria’s Cultural Preservation Department’s request for repatriation, but a much wider range of subject matter was also discussed, some of which was specific to the California Valley Miwok Tribe and of the misuse of university facilities by some individuals purporting to be working in the interest of the Tribe.

Much was discussed about the university’s system and the way in which they interpret and implement decisions in accordance with Section 106, Native American Graves Protection and Repatriation Act (NAGPRA). University of California, Berkeley officials Mr. Ben Garcia, Head of Interpretation and Education and Mr. Anthony M. Garcia, Anthropologist/Repatriation Coordinator were both very professional and cordial with the Tribe throughout the visit and gave the Tribe a tour of the museum facilities, preceding the consultation.

In all, the tribal representatives feel this was a productive introduction and that the consultation went well. The Tribe is hopeful that the relationship initiated today with the representatives from the University of California, Berkeley, will strengthen over time, but it has to be noted that the Tribe found the explanation peculiar how this university interprets Section 106 (NAGPRA) to include other entities other than federally recognized tribes in their decision making process, when in fact the Tribe found that the census among federally recognized tribes is that while many can offer comment, Section 106 exclusively gives final authority and government-to-government consultation between the acting agency whether it be federal, state or local and the federally recognized tribes.