“Sliver Of A Full Moon”, Presented by NIWRC and Indian Law Resource Center 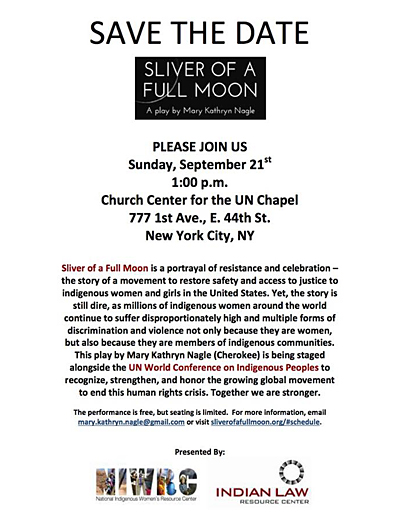 SAVE THE DATE: Flyer for "Sliver of a Full Moon", a play by Mary Kathryn Nagle, opening September 21st, 2014, at the Church Center for the UN Chapel in New York City, New York.

Sliver of a Full Moon is a portrayal of resistance and celebration – the story of a movement to restore safety and access to justice to indigenous women and girls in the United States. Yet, the story is still dire, as millions of indigenous women around the world continue to suffer disproportionately high and multiple forms of discrimination and violence not only because they are women, but because they are members of indigenous communities. This play by Mary Kathryn Nagle (Cherokee) is being staged alongside the UN World Conference on Indigenous Peoples to recognize, strengthen, and honor the growing global movement to end this human rights crisis. Together we are stronger.

The performance is free, but seating is limited. For more information, email mary.kathryn.nagle@gmail.com or visit https://www.sliverofafullmoon.org/#schedule
By CVMT|2022-10-10T07:19:54-08:00July 16th, 2014|Events|Comments Off on “Sliver Of A Full Moon”, Presented by NIWRC and Indian Law Resource Center