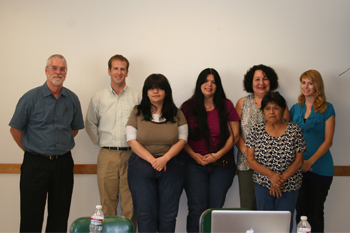 The consultation took place at the campus’ Mendecino Hall. Upon entering, the Tribe was greeted by Ms. Cristi Hunter (Collections Manager, CSUS) and escorted to the conference room where the consultation was to be conducted. After all attendees had signed in and introductions were concluded, Chairperson Silvia Burley, of the California Valley Miwok Tribe, thanked the university officials for this meeting and addressed everyone as to current activity within cultural preservation in the Native American community and of the various tribes and their affiliates that are collaborating and building consortiums to have a stronger voice in addressing this sensitive subject matter. After the concerns of the Tribe were voiced, Mr. Jacob Fisher, Ph. D., Assistant Professor/NAGPRA Director, Department of Anthropology, CSUS, very satisfactorily answered every concern with in-depth explanations, then went into finite detail of the current collections being held at CSUS and also spoke of the universities working with various Native American tribes. Mr. Charles Gosset, NAGPRA Coordinator and Dean of Social Sciences and Interdisciplinary Studies, also contributed to the discussion and spoke of what his responsibilities are within the department.

Chairperson Burley then informed everyone of a recent visit to a culturally-preserved visitor’s site in the valley, of the Tribe and cultural department’s history of involvement in regards to site visits, repatriations, consultations and other actions undertaken both previously and currently. CSUS official Mr. Jacob Fisher, Ph.D., then went into detail of the definition of NAGPRA and of his previous and current experiences in working within its legal definitions and how they apply its provisions at CSUS, in working with Native Americans and federally recognized tribes. It was a great conversation that put any additional concerns that the Tribe had at ease. This institution’s interpretation and implementation of the NAGPRA laws should be a boilerplate to every other institution throughout the state of California, for they truly understand the full meaning of the provisions. Also among other subjects discussed, were previous archaeologists and archaeological sites impacted in California from the late 1800’s to the 1950’s, of some of the issues in the cataloging and identifications within some of these older collections, and of sensitive areas of interest whereas the university would notify the Tribe; as well as the identifying of tribal officials whom the state conducts government-to-government consultations with, of the expanding problem of individuals whom mis-represent themselves, of working within NAGPRA guidelines, of establishing good working relationships with the impacted Native American tribes over repatriation, artifacts and other issues, and the process for future consultations or reviewing of items currently in CSUS’ possession.

There was also a general discussion that included the Tribe’s personal history, contact information, the process in which the Tribe will give notification for future visits – so as to stop the chance of any future mis-representation, the current definitions of NAGPRA and even the parts in NAGPRA that are not fully addressed – that this group of university officials takes it upon themselves to employ ethical and moral standards where there are deficiencies, because they understand the frustrations and sensitivities that are felt by indigenous peoples – is a comfort to this tribe and again, hopefully, they will by example, set the standards in which someday all institutions within the state of California will adhere to and conduct themselves in this subject matter accordingly.

The Anthropology Department staff at CSUS were very professional, informative, considerate and sensitive to the Tribe’s concerns and cultural sensitivities and provided the Tribe with much documentation. The Tribe appreciates this and is thankful for their time.