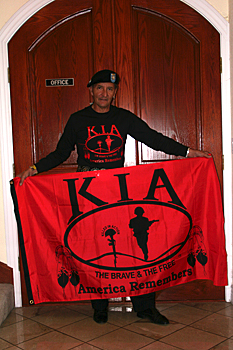 In this picture, San Joaquin Native American Veterans Lodge Commander Richard 'Windfeathers' Muniz displays the newly authorized 'Native Americans Killed In Action'(NAKIA) flag, that is representative of the ultimate sacrifice that some Native Americans have given in service of their country.

The California Valley Miwok Tribe – located at 10601 Escondido Pl., Stockton, CA (As listed in the Federal Register of the Bureau of Indian Affairs, BIA/DOI), a federally recognized tribe eligible to receive and distribute services from the federal government – on Thursday, November 4th, was scheduled to attend a celebration honoring Native American Heritage Month. Being called away to represent her tribe, Chairperson Silvia Burley at the last minute was unable to fulfill this obligation, but the Tribe had previously invited organizations, fellow Miwok Consortium members and friends to accompany the Tribe and were glad most of them were still able to attend. Of those attending four organizations, representatives were given some time to address the audience and speak of subject matter they felt was important to share on this day.

California Tribal TANF Partnership Site Manager Joni Drake, accompanied by TANF case worker Medea Caraig and also Thomas Drake, whom attended in representation of first nations, spoke of the Native American community and of TANF’s role within that community, of the services offered and the support that her organization provides to Native American families. Her first nations tribe of the North Fork Mono/Choinumni also honored Native American and culturally sensitive non-native elders with handmade indigenous gifts during the event.

Mark Fountain, Vice Chairperson of the Calaveras County Mountain Miwuk, a Miwok Consortium member tribe, spoke of the history of his tribe and of the rich history of the local Miwok peoples. He went into great depth of his tribe’s interest in cultural issues and of working more closely with Caltrans on active projects in his tribe’s area. He talked of the learning experience he has had over this last year in being his tribe’s vice chairperson and of his aspirations for his tribe’s future. Before the event ended, he also accompanied another Miwok singer in performing a traditional Miwok song for all attending.

Cesar Caballero, Chairman of the Historical Shingle Springs Tribe, a Miwok Consortium member tribe, also attended and spoke of many issues of concern relating to the Miwok peoples and others indigenous to California. Of the greater need to identify and deal with actual Native peoples representative of an area, bringing into question the lacking standards and outdated contact lists provided by the California State Native American Heritage Commission to state agencies such as Caltrans and other state regional organizations, and of the greater need to adhere to a federal standard or to have the actual tribes of California create the standard and oversee the document.

Also, a good friend of the Tribe and Commander of the San Joaquin Native American Veteran’s Lodge, Richard “Windfeathers” Muniz, attended. Mr. Muniz spoke of the history of sacrifice that Native Americans have given in service of their country when called upon in times of war. He reminded everyone of the freedoms that they enjoy because of those sacrifices and that the following Thursday of this event, November 11th, was Veteran’s Day. He displayed to all attending, the recently authorized “Native Americans Killed In Action” (NAKIA) flag, reading aloud:

“Red is the color of the bloodshed by our Armed Forces & Special Services, who because of being Americans, were put in harm’s way. They paid the ultimate price for our freedom, both at home and abroad. We dedicate this flag to represent our sorrow and respect for those who paid the ultimate price. This flag reflects our commitment to help and support those who have been left behind; Mothers & Daughters, Fathers & Sons, Wives & Husbands, Brothers & Sisters.”

The California Valley Miwok Tribe would like to thank all of the above mentioned whom attended and represented their peoples and themselves so proudly and with such distinction that events such as this may become much more common place in the near future.