On Wednesday, September 28th, 2016, ABC 30 Action News reporter Nathalie Granda reached out to the California Valley Miwok Tribe for their point of view of the issue regarding the Chowchilla Union High School’s decision to phase out their “Redskins” name and mascot in order to comply with the 2015 legislative bill signed by California Governor Jerry Brown, which enforces a ban to end all usage of the term in California schools by January 1st, 2017.

Despite the ban, the Chowchilla City Council has approved a plan to place honorary “Redskin Way” signs atop the street signs along Humboldt Avenue, close to Chowchilla Union High School, which City Councilmember Richard Walker has stated are temporary and can be removed at a later date, when the City Council deems it appropriate to do so.

Ms. Granda spoke at length over the phone with California Valley Miwok tribal representative Tiger Paulk, who expressed the Tribe’s disappointment with the Chowchilla City Council, in a move that the Tribe sees as blatantly defying the intention and honorable spirit of Governor Brown’s bill.

Contents below reposted (with permission) from the original report displayed on the ABC 30 Action News website:

CHOWCHILLA, Calif. (KFSN) —
A North Valley high school will soon have to change its mascot but the city hopes to keep the legacy alive with honorary street signs. The city council approved a plan to place Redskin Way signs above the street where Chowchilla Union High School was founded.

After almost a century Chowchilla Union High School’s time as the Redskins will soon come to a close by the beginning of next year.

“I’d rather them not change it. It’s sad,” said Jando Guerra, parent of Chowchilla student.

In a unanimous vote on Tuesday, the city council agreed to place honorary signs on top of the street signs where the school sits along Humboldt Avenue.

“Hopefully it will send a message honoring who we’ve always been– who we will continue to be in our hearts even though we have to change the mascot name,” said Richard Walker, City Councilmember.

The change comes after Governor Jerry Brown passed a bill banning the name Redskins from high school football teams by the end of this year.

Gustine High School and Tulare Union– the two other Valley schools with the Redskin name– have already made the change.

Walker said this isn’t about disrespecting anyone, but rather honoring a tradition.

“Since Chowchilla has been incorporated, we’ve been Redskins. So generation after generation has carried that name proudly and with honor.”

Others feel differently– the California Valley Miwok Tribe, a federally recognized tribe in the San Joaquin Valley, said it is the meaning behind the word that’s disrespectful to Native Americans. They said they are upset the city is trying to find a loophole to the law.

“They’re finding a way to skirt the spirit of the bill that’s been enacted and trying to find a way around it. What they consider their heritage, but that heritage isn’t theirs,” said Tiger Paulk, California Valley Miwok Tribe.

The school hasn’t commented on when exactly the name will change to and are still asking for mascot ideas.

Walker said signs are temporary and can be taken down whenever the city feels it’s appropriate to remove them. They will not be making any changes to the street names.

The original report can be viewed here, on the ABC 30 Action News website: http://abc30.com/society/a-chowchilla-high-school-being-forced-to-change-mascot-city-council-honoring-legacy-with-street-signs/1531261/

“Redskin”, an original term once coined by some eastern native tribes to differentiate themselves from other races, this term was then taken in the later 1800s by non-native Americans moving west to describe these very people in derogatory terms.

The meaning in the most part by the early 20th century has been used to demean the very people it is meant to describe. The content of the image shown below is just one example of this and one should ask themselves, “Would you want yourself or your ethnic background to be defined in such a way?” 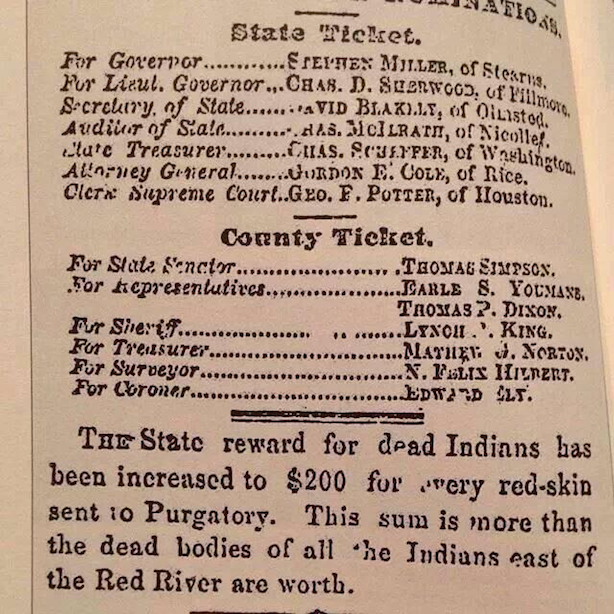 An excerpt from the September 24, 1863 edition of The Daily Republican newspaper, published in Winona, Minnesota.

Some say we use the term out of respect and it is “our heritage” to use the name. How can you tell someone who is offended that calling them or naming your organization what is offensive is respectful? Also, if you are not a descendant of one of the few eastern tribes that self–described themselves this way, how can you say it is your heritage?

There are many racial terms and representations in American history that have no place in a modern society and have been corrected, and eliminating the term “redskin” is just another example of racism from a bygone era whose time has come.