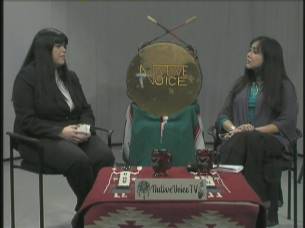 The Tribal Council and members of the California Valley Miwok Tribe, with its offices located at 10601 Escondido Place, Stockton, California – would like to thank host Cihuapilli Rose Amador of Native Voice TV (which airs on Sundays at 6 p.m. PST on Comcast channel 15 in San Jose/Campbell) for inviting Tribal Chairperson Silvia Burley to discuss various issues which affect indigenous peoples’ lives and future prospects.

Cihuapilli Rose Amador first appeared on the air waves with Native Voice TV in March of 2004. Native Voice TV is a highly informative talk show with knowledgable and sometimes well known guests from across the USA, whom discuss topics of concern for indigenous peoples, along with community and civic-minded interaction. Updates on activities and current events are also a staple of the show.

Miss Amador is also credited with co-founding La Raza Roundtable, as well as actively participating in the National Council of La Raza, based in Washington D.C., and has worked for decades in non-profit organizations such as CTC/WorkNET. She is a “Woman of the Year” award winner, as presented to her by the state of California in 2005. For further information about “Native Voice TV”, please visit http://nativevoicetv.com/