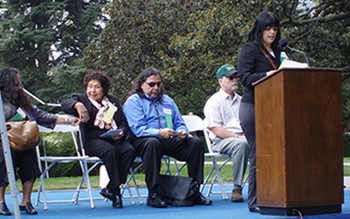 Tribal Chairperson Silvia Burley was among the Tribal Leaders invited to speak at the 40th Annual California Native American Indian Day gathering held on September 28th, 2007, at the state capitol in Sacramento, California. Many relationships were strengthened and new ones were formed. The Tribe was honored that Tribal Chairperson Silvia Burley was asked to attend. Below is a transcript of the speech she delivered at the event:

“Welcome, I’m Silvia Burley, Chairperson of the California Valley Miwok Tribe, located in Stockton. Its good to see such a large turnout for this honorable event. I know many of you have traveled a long way to be here As with many tribes, our tribe has learned and shared a lot this year and we’d like to give a “Special Thanks” to the Indian Tribal Council of California, MACT Health Board, Inc, California Rural Indian Health Board, National Indian Health Board, California Nations Indian Gaming Association, Sierra Nevada NAGPRA Coalition, Native American NAGPRA Coalition, California Tribal TANF Partnership, Housing and Urban Development, Senator Boxer, Senator Feinstein, Congressman Jerry McNerney & Staff, San Joaquin Council of Governments, the Department of Transportation, and the many Departments/Tribes and People who have made such a honorable impression on our lives by contributing their time and efforts to building healthy Native American Communities. Have a great time today hope to see you all again next year. Thank you!”