Smithsonian National Museum of the American Indian – Repatriation and Reburial 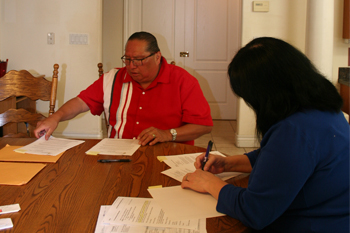 On Tuesday, June 18th, 2013, the California Valley Miwok Tribe met with Mr. Terry Snowball, Repatriation Coordinator for the Smithsonian Institution National Museum of the American Indian, Washington, D.C.; in regards to the scheduled repatriation of unassociated burial objects that were originally taken from four sites within the cultural territory of the Plains Miwok and Northern Valley Yokuts (San Joaquin County). The reburial (of which no human remains were involved) is scheduled for June 19th, 2013.

The National Museum of the American Indian Act (NMAI Act) was enacted in 1989 and by law, requires that all museums that receive federal funding are to return specified items, including human remains and sacred objects, to the tribes with whom they are culturally affiliated. On May 19th, 2008, the Santa Rosa Rancheria Tachi Yokut Tribe initiated the repatriation process claim request. On February 18th, 2013, the Smithsonian Institution NMAI Board of Trustees approved the claim request for the repatriation of unassociated burial objects taken from San Joaquin County, California.

The NAGPRA repatriation process is a complex and lengthy process that involves an ongoing collaboration between tribes, their cultural departments and staff, the museum staff, Repatriation Coordinator, Research Specialist, the Museum Director, and Board of Trustees.

The Tribal Council of the California Valley Miwok Tribe, Chairperson Silvia Burley, Vice Chairperson Anjelica Paulk and Secretary Treasurer Rashel Reznor would like to thank all whom were involved in the joint cooperation for a successful repatriation and reburial (at an undisclosed location) of unassociated burial objects from San Joaquin County.