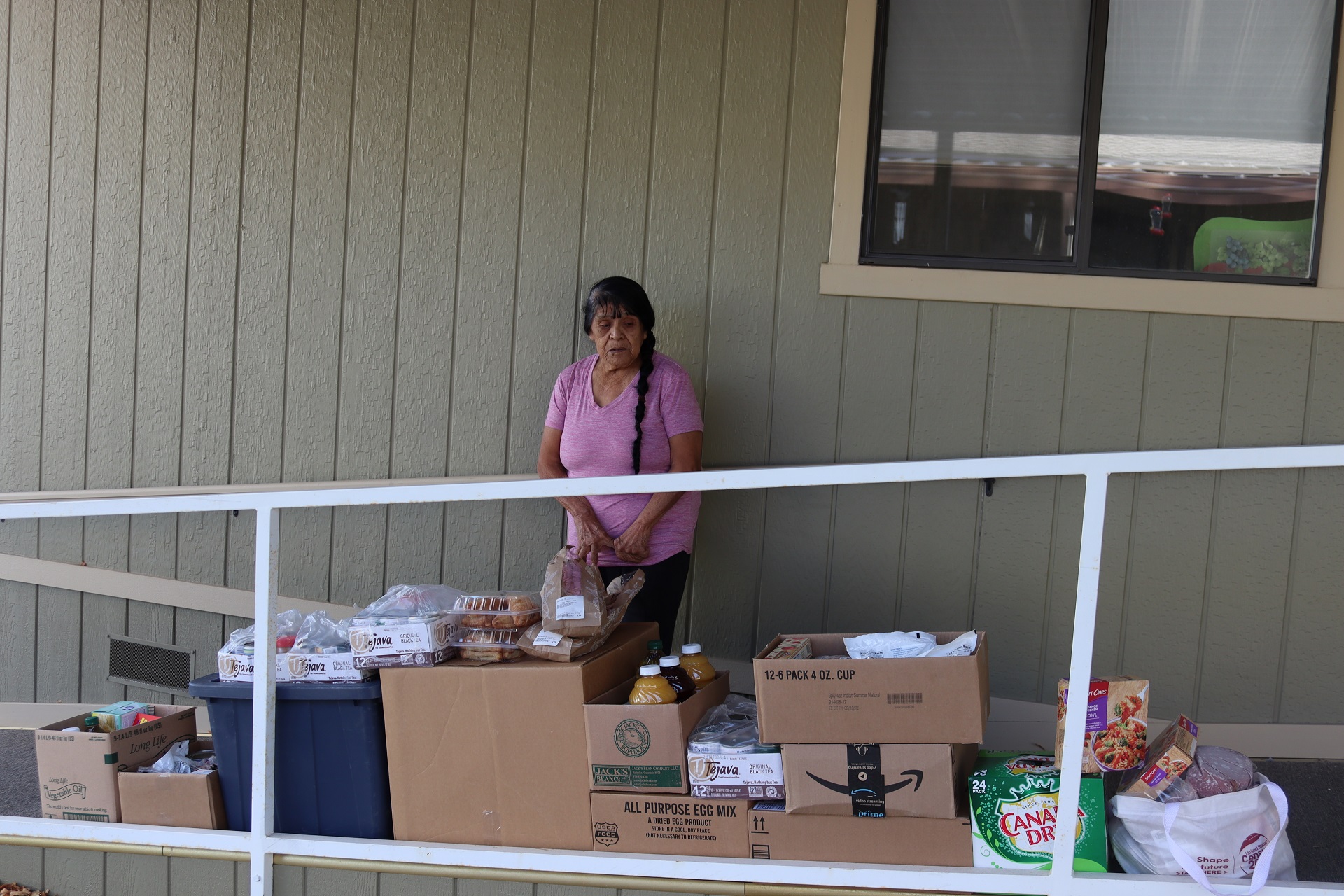 On Friday, October 28th, 2022, The Food For Tribal Families food delivery was made to Mildred Burley Program Director for distribution amongst the various
tribal families and citizens in need of this assistance. This again was a very busy month and with litigation and political issues on the horizon, affecting scheduling  made this delivery much later than anticipated.
Weather was good though, and delivery was made without issue, making sure to supplement the diet’s of all our tribal citizen’s in need with additional fruit’s, vegetable’s, meat’s and bread’s along with supporting foods to round out and balance meals.
Although we are once again having to defend ourselves from Bureau of Indian Affairs continuing intrusions upon our right to exist and govern as a federally recognized sovereign tribe, spirit’s remain high due to well established federal Indian case law that the very interference to take over, enact governmental forced enrollment upon the tribe by the BIA outside the tribe’s own enrollment ordinances and then the disenrolling all actual enrolled citizens in the attempt to make this a casino tribe for some United States anointed developer at the cost of our people, culture, programs, government, hell even our very identity, can not really happen in this day and age, or at least should not regardless how rouge a department in the federal government has become.
To this end, please watch the video below with accompanying description.
In their most recent attempt to steal an already known and organized tribe with a duly elected chairperson and government officers entrusted with overseeing the well-being of numerous members numbering in the dozens with elders and infants alike, Elder Mildred Burley reads from a prepared statement squarely putting all responsibility for the current and upcoming indiscretions against the tribe squarely on the shoulders of AS/IA Bryan Newland. Mr. Newland’s responsibilities as acting AS/IA is supposed to be for the empowerment of the economic status of tribes.
To empower tribes to provide for their citizens, to sustain and protect their culture and identity, to maintain a working government to government relationship in helping to have a voice and to strengthen and protect their sovereignty. In this, he is a failure, either specifically directing, passively assisting or just turning a blind eye at yet another in a series of illegal criminal takeover attempts currently being conducted on his watch. He himself knows better because he was instrumental on a December 22nd, 2010 decision under then AS/IA Larry Echo Hawk that followed the well established rule’s under federal Indian law and saw through the flaws of the attempted paternalism that the BIA had tried to conduct for years against the tribe at that time.
His involvement at that time as a minor employee does not now preclude him from following the law as current AS/IA and himself acting within his authority to reestablish a decision supported by well established Indian law. To cease the current department that works under his watch from trying to once again conduct an act of paternalism and colonialism against our tribe and her people’s.
All of the tribes woes for these many years were bought about by Senator Dianne Feinstein and her late husband Richard Blum at the top using political influence and money to assist her one time San Francisco District Attorney Arlo Smith in stealing the last tribe with contiguous rights to the bay area in the endeavor to build the most lucrative gaming enterprise in California. This was also met with nepotism, cronyism and mass corruption by BIA officials either promised lucrative deals, massive payoffs or most assuredly promotions or top positions within their prospective departments.
Now with the Senator’s current health dilemmas and vastly deteriorated mental decline, many vested in this endeavor against the tribe are now not fearful to throw this aging and despondent politician to the wayside and to not waste past efforts conclude this nefarious action against the tribe of their own accord.
The hypocrisy of the BIA is that the worst actions we have experienced as Native women, children and men, as a tribe and the tribes’ very sovereignty and hope for the future has been and continues to be done against us by the very department entrusted with the responsibility for protections against those very action’s.
At this time, we would like to thank all who work with the tribe regarding the health and nutrition of all of our needy citizen’s both old and young alike listed below.
The United States Department of Agriculture, FEMA, Cal-OES, The Grocery Outlet, Costless Stores Inc., Walmart Stores Inc., Food For Less Stores Inc.,
the community of Morada California, all participants, volunteer’s and our Program Director, Mildred Burley.