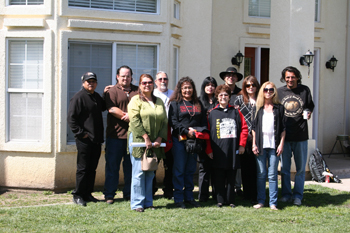 The California Valley Miwok Tribe – located at 10601 Escondido Pl., Stockton, CA 95212 – hosted an event of awareness on Friday, March 19th, 2010. The guest speaker of this event, Ms. Elouise Brown (Dine’ Navajo), has been speaking extensively throughout California on this subject and we (the “Tribe”) were honored to be her host during her stay in Stockton.

There was an attempt by a power company to build a power plant on her reservation in close proximity to her people with existing evidence that it would be detrimental to the health and well being of those in the surrounding area. Knowing that the locals would benefit little if at all (in any way) from the project, that the local sacred lands would be defiled, and that future health concerns could devastate the local population, Elouise took it upon herself to stand strong for her people.

From protecting the land locally to walking the halls of the New Mexico State Capitol until a decisive and humanitarian vote was given in her favor to stop the project, she has remained diligent in her endeavor for her people and her land, the amount of space we have here cannot do justice to all that she has endured and accomplished. We were happy to host this event at the Tribal Offices and encourage all Indigenous Peoples to follow Ms. Brown’s example of protecting their people, lands, and culture so that their Indigenous Peoples will still exist and continue to contribute and enrich the diversity of this great country for generations to come.

The California Valley Miwok Tribe would like to thank Ms. Elouise Brown and the attendance of representatives from the Miwok Consortium member Tribes and other Tribal Peoples whom attended.