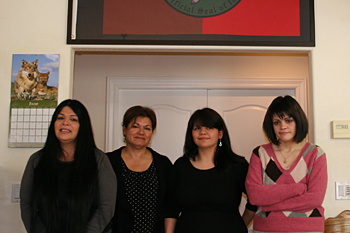 Ms. Gomez has been the Chief Justice for the Shingle Springs Band of Miwok Indians Tribal Court since 2010. It is written on the Office of Governor Edmund G. Brown Jr. – Newsroom that, “Ms. Gomez was Assistant Secretary of Environmental Justice and Tribal Government Policy for the California Environmental Protection Agency from 2008-2010, Chief of the Native American Liaison Branch for the California Department of Transportation from 1999-2008 and a Housing and Community Development representative for the California Department of Housing and Community Development from 1989-1999.”

The website also states that, “Ms. Gomez is a member of the Tribal and State Court Forum for the California Administrative Office of the Courts and has served as Chair of the Transportation Research Board’s Native American Transportation Issues Committee.” Cynthia Gomez received her Juris Doctorate degree from the University of Northern California, Lorenzo Patino School of Law.

Governor Brown established the Tribal Advisor by Executive Order to bolster communication and collaboration between California state government and Native American tribes. The Tribal Advisor will serve as a direct link between the Governor’s Office and tribal governments on matters including legislation, policy and regulation.

The California Valley Miwok Tribe would like to extend a warm thank you to the newly appointed Tribal Advisor to the Governor’s Office and Executive Secretary for the Native American Heritage Commission, Ms. Cynthia Gomez, for traveling down to CVMT’s Tribal Offices in Stockton California in fulfillment of a recently scheduled government-to-government meeting.