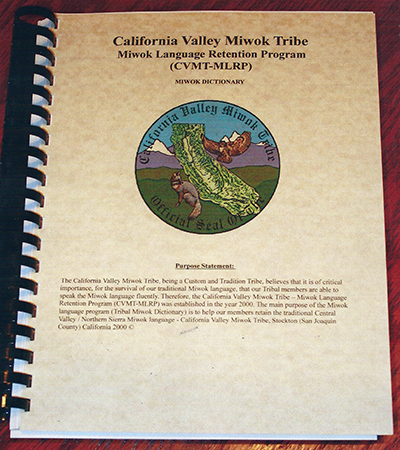 The California Valley Miwok Tribe believes that its cultural identity not only consists of passing on its traditional knowledge and skills of ceremonies, dances, songs, medicines, preparing and cooking foods, arts and crafts, spiritual beliefs, sacred stories, hunting and gathering practices and retaining the Miwok language.

Although the languages of the American Indians have survived under the enormous pressures to assimilate, they are by no means healthy, and many face extinction. Language contains generations of wisdom. When a language is lost, the knowledge that language represents is also lost.

The California Valley Miwok Tribe, being a Custom and Tradition Tribe, believes that it is of critical importance, for the survival of our traditional Miwok language, that our Tribal members are able to speak the Miwok language fluently. Therefore, the California Valley Miwok Tribe – Miwok Language Retention Program (CVMT-MLRP) was established in the year of 2000. The main purpose of the Miwok language program (Tribal Miwok Dictionary) is to help our members retain the traditional Central Valley / Northern Sierra Miwok Language. The Tribe believes that retaining our language is a central component of cultural identity.