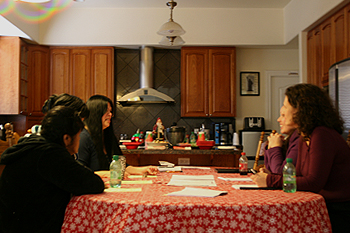 The California Valley Miwok Tribe (located at 10601 N. Escondido PL, Stockton, CA, as listed in the Bureau of Indian Affairs’ BIA/DOI Spring 2011 Tribal Leaders Directory), a federally recognized tribe eligible to receive and distribute services from the federal government – on Thursday, December 15, 2011, hosted a meeting attended by officials from California State Parks to learn more about the location, construction, features and exhibits of the new proposed visitors center for the Calaveras Big Trees State Park; located off Highway 4, just north of Arnold in Calaveras County, California.

After a brief tour of the Wall of Achievement and details of the Tribe’s history (followed by introductions), Chairperson Silvia Burley spoke in-depth of the Tribe’s knowledge of Arnold and the surrounding communities, giving historical perspective and of the Tribe’s appreciation for the improvement being proposed at the Calaveras Big Trees State Park, as well as the commitment the State Parks are demonstrating by coming to the tribal offices to go over any concerns the Tribe may have and requesting any information and suggestions that would help to enhance the various features within the visitors center.

Many exhibits are planned, including specifically addressing the history of the Sequoia and its range of existence. The discussion also encompassed the uses that the local Native Americans had for the redwoods located within what is now the Calaveras Big Trees State Park. Tribal Elder Mildred Burley also informed the State Park officials of the uses the local Miwoks had for various other trees indigenous to the area, including the Sugar Pine. One interesting exhibit being proposed is a forested diorama, complete with a vast array of wildlife displays and a set of audio buttons for a select few of the animals, so that visitors may hear and learn the sounds that they make in their natural habitat.

Another proposed exhibit will showcase various aspects of the park, including the upper and lower groves, plant life, waterways, etc; and will also include a unique map of the entire park. Still another of the many exhibits may include the history of the local Native American inhabitants, of which the Tribe may be privileged to contribute to, and other subjects that may also be addressed could include; the local ecosystem, recreation and Calaveras County’s rich history and the diverse culture of its citizens. There is even a very interesting concept of a unique hallway for visitors to walk through, among other features within the visitors center and the surrounding grounds that are sure to enhance your visit to the Calaveras Big Trees State Park, after the final construction of this new proposed visitors center and its surrounding grounds have been completed. Much information was exchanged and the interaction between State Park officials Ms. Kathy Schulz, Park Interpreter and Ms. Sarah Fonseca of the California Indian Heritage Center Division with tribal officials was very productive and we thank them for their courtesy and professionalism.