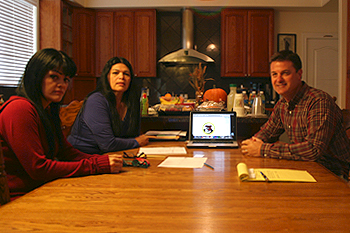 The California Valley Miwok Tribe (located at 10601 N. Escondido PL, Stockton, CA, as listed in the Bureau of Indian Affairs’ BIA/DOI Spring 2011 Tribal Leaders Directory), a federally recognized tribe eligible to receive and distribute services from the federal government – on Monday, October 3rd, 2011, invited the Supervisor of Calaveras County’s 5th District, Mr. Darren Spellman, to the tribal offices to discuss how to best align both parties’ resources for the betterment of Mr. Spellman’s constituents; which also include a number of Native Americans currently residing within his district.

The California Valley Miwok Tribe currently with no lands held in trust, exercises inherent federal tribal sovereign authority in ten counties that exist within the Miwok’s aboriginal plain of existence, that are currently without Miwok federal representation. The current plight of the communities in these counties which also have a large number of Native Americans concerns the Tribe, so that it has now began working closer with the local governments and elected officials to address issues that the Tribe, with its federal status, may be able to offer additional resources to address.

This month, the Tribe met with Supervisor Darren Spellman to initiate such action. Mr. Spellman is a former history teacher and as such, with foresight, envisions a broader perspective of how to best serve his constituents and address their issues, all the while exercising transparency in government. The meeting went well and the Tribe looks forward to having a long working relationship with Mr. Spellman, in which we hope to address many issues.