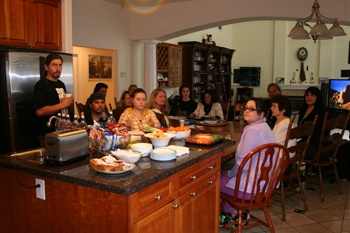 Ms. Debra Grimes the Cultural Preservation Director of the California Valley Miwok Tribe and of the Calaveras Band of Mi-Wuk Indians discussed specific projects that Caltrans had previously completed, and current projects that involve both tribes. Ms. Grimes was accompanied by the Calaveras Band of Mi-Wuk Indians Tribal Chairperson, Gloria J. Grimes and various tribal members aside from her cultural preservation staff. The meeting commenced with the California Valley Miwok Tribal Chairperson Silvia Burley bringing forth a talking pipe and explaining its purpose before stating what the Tribe wanted to accomplish and asking for introductions from all attendees. Caltrans District 10 Director Ross Chittenden than followed with an in-depth explanation of the intent by his department and himself to improve upon and strengthen the working relationship between Caltrans and the tribes, of networking more closely, at having the tribal involvement at earlier stages to avoid problems in the later stages of projects. Mary Oliva also spoke of this new era of an improved partnership, of bringing up to date any deficiencies in project information regarding current and future project sites, working more closely with the tribes cultural preservation department now and in the future. Kathleen McClaflin Caltrans District Native American Liaison contributed information explaining what her position and duties are at Caltrans District 10. Ms McClaflin is a regular attendee at these meetings and has helped much in improving the communication between Caltrans District 10 and the Tribal Cultural Preservation Department. Also in attendance for Caltrans were Ms. Tina Biorn Native American Studies Branch Chief, and Ms. Jill Hupp Section 106 Coordinator both from the Sacramento office. They also explained their positions and duties. At times throughout the meeting their expertise proved invaluable when subject matter was discussed that was in their areas of expertise.

In the Meeting, Ms. Grimes went into a very in-depth discussion about project specifics for many sites speaking from experience about her concerns of the many deficiencies in previous and current projects, questioning specific previous actions taken that were either out of compliance or in which correspondence was lacking. There was also in-depth discussion on site monitoring and of site safety mutually working with Caltrans to address these issues on current and future projects as they now exist or as new concerns arise. Caltrans District 10 Director Ross Chittenden addressed all concerns and discussed better inter-office communication within Caltrans. To have all departments up to date on current information regarding active projects, of all information being correct in nature before forwarding to other involved entities, county, state and federal. Mr. Chittenden also reiterated District 10’s commitment to work more cohesively with the tribes in the future.

At the end of the meeting, all agreed to improve communication, documentation and of strengthening the working relationship between Caltrans and the tribes to stay on schedule on existing projects and not to impede future projects that are currently being planned. All parties mutually agreed with Mr. Chittenden on this commitment and the meeting ended in a good and positive way. The tribes’ relationship with Caltrans District 10 is a work in progress that is continually showing improvement, and for this, the California Valley Miwok Tribe, the Calaveras Band of Mi-Wuk Indians, the Cultural Preservation Department and its Director Ms. Debra Grimes would like to thank the new Caltrans District 10 Director Mr. Ross Chittenden and all of the employees in the Stockton, Fresno, and Sacramento Offices that he has involved in this endeavor.