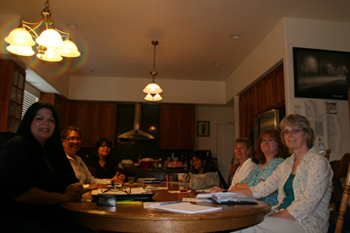 The California Valley Miwok Tribe (located at 10601 N. Escondido PL, Stockton, CA, as listed in the Bureau of Indian Affairs’ BIA/DOI Spring 2011 Tribal Leaders Directory), a federally recognized tribe eligible to receive and distribute services from the federal government – on Monday, July 11th, 2011, conducted a government-to-government meeting between representatives of the U.S. Forest Service and elected officials of the California Valley Miwok Tribe. After introductions, the discussion began with the need to expand and strengthen the current relationship the Tribe has with the U. S. Forest Service (under Executive Order 13175) and of the need for the creation of a Memorandum of Agreement (M.O.A.) between the two parties.

The Tribe spoke in-depth of what they wished to accomplish at this meeting, after which Ms. Kathy Strain, Forest Heritage Resource/Tribal Relations Programs Manager, on behalf of the U.S. Forestry officials present, went into detail, addressing the subject matter explaining the process in detail. The Tribe also discussed Section 106 federal law of the Native American Graves Protection and Repatriation Act (NAGPRA) and of consultation under the law in regards to individuals, non-recognized tribes and federally recognized tribes; as well as these other entities’ input and authorities in regard to the California Valley Miwok Tribe’s relationship with the U.S. Forest service. This also brought about much response from the U.S. Forest officials in attendance, whom gave a thorough explanation of the subject matter. Chairperson Burley and tribal officials spoke of the Tribe’s activities and current relationships; explaining how tribes and tribal organizations are starting to network in working with each other and federal entities because of the friendly atmosphere towards indigenous peoples that seems to be prevalent under the Obama administration. Christina Welch, Deputy Forest Supervisor, then asked Chairperson Silvia Burley for an overview of the Tribe’s history and of the Tribe’s leadership, due to confusion continually perpetrated by non-tribal individuals, and of the Tribe’s aboriginal service area and in what counties the Tribe is federally represented.

Chairperson Burley and tribal officials answered all questions, also going into detail of the turbulent history of not only this tribe, but of all local native peoples; explaining how the Tribe has continued to protect its inherent sovereignty and afterwards provided documentation addressing this and other issues in which the U.S. forest service had come to this meeting with previously provided (by unknown individual/s) information that was both erroneous and outdated. The meeting also encompassed interaction between the parties on current and future projects, parks, in what areas the Tribe wishes to work with the U.S. Forest service, what the process is for addressing tribal concerns and of keeping the Tribe notified. This was just an initial meeting between the U.S. Forest service and the California Valley Miwok Tribe and there is still much more to do, but the Tribe feels that this was a great start and gives thanks to all of the officials from the United States Forest service whom attended and gave of their time.