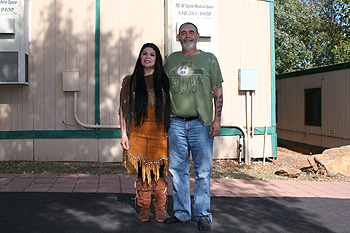 This was the first such meeting between the chairpeople of both tribes to address issues that included concerns over membership services, current events and the mutual protection of both tribes’ sovereignty; among other issues. Officials of the Shingle Springs Rancheria were very cordial and gracious hosts, whom made the Tribe feel very welcome during the afternoon of the meeting and CVMT representatives felt a connection and understanding was formed because of the like-mindedness of both tribes’ elected leaders.

The California Valley Miwok would like to thank the Shingle Springs Rancheria and their Chairman, Nick H. Fonseca, for clearing time in their busy schedule to make this initial meeting possible.