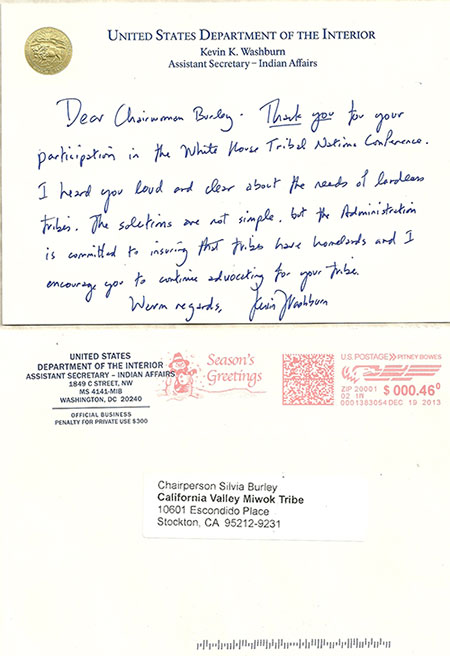 On November 13, 2013, while representing the California Valley Miwok Tribe at the 5th White House Tribal Nations Conference (WHTNC) in Washington DC, Chairperson Silvia Burley participated in the “Strengthening Tribal Economies (Breakout Session) in which she spoke in front of a delegation of White House and Interior officials to bring to their attention the need for the Bureau of Indian Affairs (BIA) and the officials and Departments of the White House , to work together with federally recognized tribes that are “landless”, to build a stronger relationship between their agencies and departments in regards to the issues facing federally recognized “Landless” tribes.

Chairperson Burley went into detail outlining the hardships that federally recognized “landless” tribes deal with on a daily basis. She made it a point that she will continue to advocate, and be a voice for the landless tribes. She said there needs to be initiative taken at the Bureau of Indian Affairs and by White House officials to collaborate with all federally recognized “landless” tribes with efforts focused on action to bring economic opportunities to the ‘landless’ Native sovereign nations whom are in desperate need of creating jobs and skilled labor for positive growth and forward progress of these tribes.

Chairperson Burley asked that her voice be heard and that the voice of all other federally recognized “landless” tribes be heard too! She reiterated that the trust responsibility that the United States has with sovereign Tribal Nations must be met and that relationship should be continually strengthened.

While attending the WHTNC, Chairperson Burley learned that California is home to twelve federally recognized tribes that are ‘landless’. In late December 2013, Chairperson Burley received a personally written letter from the United States Department of the Interior Assistant Secretary, Indian Affairs, Kevin Washburn. The letter states, “ Dear Chairperson Burley, Thank you for your participation in the White House Tribal Nations Conference. I heard you loud and clear about the needs of landless tribes. The solutions are not simple, but the Administration is committed to insuring that Tribes have homelands and I encourage you to continue advocating for your Tribe. Warm Regards, Kevin Washburn.”

The California Valley Miwok Tribe would like to thank President Barack Obama, the Obama Administration, Bureau of Indian Affairs officials, Dept. of the Interior officials, Dept. of Justice participants, speakers, coordinators, other government departmental officials, Tribal Chairperson/Chiefs and Tribal Representatives who attended the 5th White House Tribal Nations Conference. and a special thank you to the many individuals and groups who spoke to Chairperson Burley regarding the ‘landless’ tribes’ issue. In closing, the California Valley Miwok Tribe warmly thanks Assistant Secretary of Indian Affairs Mr. Kevin Washburn for his letter informing Chairperson Burley that her voice and message was heard loud and clear.