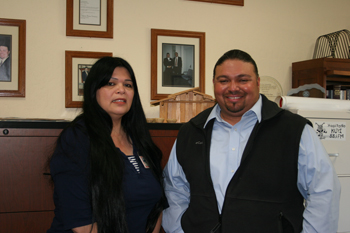 Mr. George was recently instrumental in coordinating a government-to-government consultation between the U.S. Forest Service and the Tribe that will take place on June 2nd at the tribal offices located at 10601 Escondido PL. Mr. George fulfills a much needed position, improving the communication and understanding between the U.S. Forest Service and the federally recognized tribes, helping to strengthen the existing relationships to be able to work together more cohesively now and in the future.

The Tribe has already benefited from the work that Mr. George does and so took this opportunity for a meet and greet at his office in Vallejo, CA. Mr. George is a Native American, a former tribal chairman and a member of the Hoopa tribe. Being part of the Native American community and being active in it throughout his life gives Mr. George the valuable insight needed in his current position in which the Tribe feels that they have already benefited from.