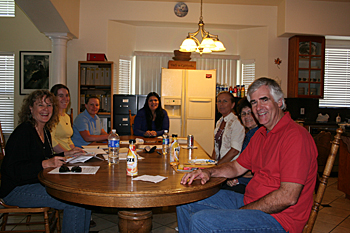 The California Valley Miwok Tribe (located at 10601 N. Escondido PL, Stockton, CA, as listed in the Bureau of Indian Affairs’ BIA/DOI Spring 2011 Tribal Leaders Directory), a federally recognized tribe eligible to receive and distribute services from the federal government – on Friday, May 13, 2011 – hosted a follow-up meeting to a prior meeting held on April 8th, 2011, between the United States Army Corps of Engineers (USACE) and the Tribe at the tribal offices. This follow-up was in regards to what the Tribe feels was an inadequacy of a developer in Calaveras County to allow the Tribe to monitor and investigate an area of estimated great historical importance and of the USACE’s local California South Branch chief’s pre-mature permitting for the project before the Tribe felt the consideration for cultural preservation had been met. The meeting started with introductions of all attendees present, along with Tribal Liaison/Project Manager Mark Gilfillan on conference call from the Office of the Commander in Grand Junction, Colorado. Debra Grimes, Cultural Preservation Department Director for the California Valley Miwok Tribe (CMVT), started the meeting by questioning the way the whole process has been handled on this specific project, especially the recent limited timeline that was afforded for site inspection which corresponded with heavy seasonal rains, making inspection impossible due to extreme land saturation and without proper consultation why the initiation of permitting was undertaken.

Ms. Erin Hess, Cultural Resource Specialist (USACE) then addressed the issues, affirming that the process is indeed impacted because of the Tribe’s Cultural Preservation Department’s concerns and spoke in depth of the process in intricate detail. Ms. Grimes spoke about the proper way that this individual owner/project manager should have built a working relationship with the local Native Americans to circumvent any obstacles that could adversely affect cultural preservation and impact the developer throughout future stages of the proposed development. Mark Gilfillan (USACE) by phone, then asked for in-depth information about previous relationships, archeology, and any previous cultural inspections and if any had ever been done; finishing by asking the tribes what they are requesting. Shelly Davis-King, Ph.D., (Davis-King & Associates) interjected at this point, going into great detail about the fact that archeology is the only real action that was ever undertaken and that within the limited training of an archeologist, many aspects could be missed. She went into detail about the many ways in which without the proper cultural training, an archeologist could fail to identify, classify or in some cases not even find information of cultural significance during an on-site inspection; stating that she herself was originally trained as an archeologist, but that additional cultural training over many years has given her a better understanding of what to look for, that someone trained only in archeology may have difficulties in properly finding and identifying areas of cultural significance on this or any proposed site.

CVMT Cultural Preservation Director Debra Grimes then spoke of her previous experiences on the property from prior years and of identifying much that is now being overlooked, as well as never being afforded the additional time needed by the current owner and previous developers on this project to fully investigate and identify culturally sensitive areas, because of the fact that there are pre-existing sites already known that have been disturbed, ignored or labeled a non-issue due to the lack of knowledgeable training by previous archeologists. Mark Gilfillan (via conference call) questioned Ms. Grimes and Ms. Hess alike, if there was by chance anything that could have in fact been overlooked, and then questioned all of the previous steps that had been taken. He asked about the permit and wanted to discuss the correspondence that USACE had sent to the Tribe. The Tribe had only received it the previous day and representatives were out of the office all day. CVMT Cultural Preservation Director Debra Grimes herself did not receive a copy nor did her Chairperson, Gloria Grimes, of the Calaveras Band of Me-Wuk Indians. All attendees went over the document with Mark Gilfillan and discussed the various conditions which were in the current permit, but it was resolved that the conditions are all standard language and were not site-specific.

The discussion then progressed to sites that had been previously identified, with Ms. Davis-King, Ph.D., Ms. Grimes and Ms. Hess weighing in heavily of a continuing lack of adequate information and of no Native American participation to correctly and fully identify cultural concerns. Ms. Grimes added that we only have this moment in time to protect what is there, because decimation and desecration are eternal. Ms. Grimes and Ms. Davis-King, Ph.D., then discussed the entire lack of soil sampling through geo-thermal testing (this site specifically has had none of this type of testing), but what most of the day’s comments reflected was the Native people’s total surprise at the speed in which this specific project was allowed to be permitted – centering around the fact of the lack of Native American tribal involvement and concern over impacts to areas previously discovered and thought to be protected. Some of the known areas are no longer within a revised scope of the proposed development, prompting the tribes to ask if the USACE could expand to keep those areas protected under the USACE’s jurisdiction. Everyone concurred on these thoughts, prompting Tribal Chairpersons Silvia Burley of the California Valley Miwok Tribe and Gloria Grimes of the Calaveras Band of Me-Wuk Indians to insist that there is a need for further consultation to protect and not lose the histories of the once proud people that occupied this area, lest they be forgotten forever. Mark Gilfillan (via conference call) reiterated the USACE’s commitment to address everything that is within the USACE’s jurisdiction and to fulfill any obligations that the USACE has to its mission statement.

The final discussion included all attendees making many good arguments and offering suggestions. It was a very informative meeting, with all parties trying to coordinate and work together on rectifying what the Cultural Preservation Department sees as deficiencies on this project. With all departments being involved, the tribes sincerely hope that the project manager and the land owner will come to the realization that the previous and current lack of tribal involvement is not acceptable and that in the long-term, working together with the tribes and Cultural Preservation representatives is the best way to ensure their project will conclude to a successful completion.